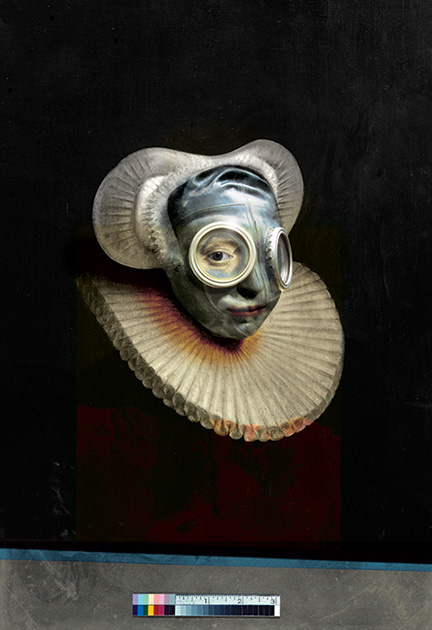 Bestiary is the product of a long fascination with Greek mythology and early nineteenth-century photography. Based on a set of mostly hybrid creature descriptions and influenced by religious iconography, myth comes full circle and meets social criticism by molding these monstrous archetypes into contemporary commentary. Most important, in this series, the beasts are separated from their usually singular dimension, assuming complex, tragic personalities in which monsters and heroes become difficult to tell apart.

Being enamored of the beauty of beasts is an obsession that periodically creeps up on me and demands expression in mysterious ways. This time, what I found in vintage prints wasn’t only an abundance of captivating subjects willing to be transformed into legendary creatures, but also a language of archiving, processing, and signing documents that, along with the passage of time brutally aging them, was visually compelling and worth preserving.

Bestiaries are, traditionally, catalogs in which the narrative of a natural history and illustration of beasts is usually accompanied by a moral lesson. This Bestiary is no different. Today, nature and science intertwine in ways that at times prove to be less than ideal, and this compilation of brutes is a testament to this exact point.