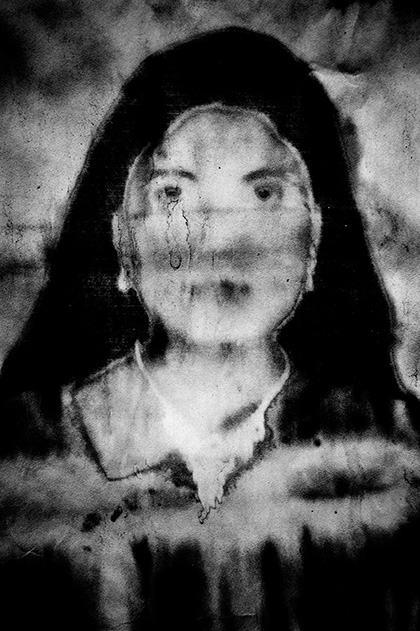 On April 24, 2013 the world witnessed the biggest garment factory accident till date. Rana Plaza, an eight story commercial building collapsed during morning rush hour in Savar, Bangladesh and resulted in a death toll of more than eleven hundred and over two thousand five hundred injured. Cries and moans rise above the silence of the world, in awe and undeterred in their buying habits. While the search goes on for those buried under collapsed walls, another wall gets filled with pictures of the missing. The posters are a last cry for help, as the ghosts of the victims wouldn’t even recognize themselves in these posters weathered down by the rain and the sun as they come and go – taking with them slowly any hope of more victims rising out of the rubble. Will someone come and stand next to their pictures? Why did they take these pictures? Perhaps photos for a job application, narcissism, or to send to loved ones. Did they ever think that they would be buried under the rubble or be trapped behind a poster garnering worldwide attention? Does anyone ever take pictures for the chance that they will be used one day on a missing poster? Is this what garment workers will think of from this point forward, every time they take a picture? We don’t know these people on the posters; just like we didn’t know those men and women who worked there day after day. We do not know those who were buried alive – their dreams, passions, ambitions. But as they get wet with rain, and wrinkled by the sun – they stare out at you and me and whisper, “I was somebody. Do not forget me”.