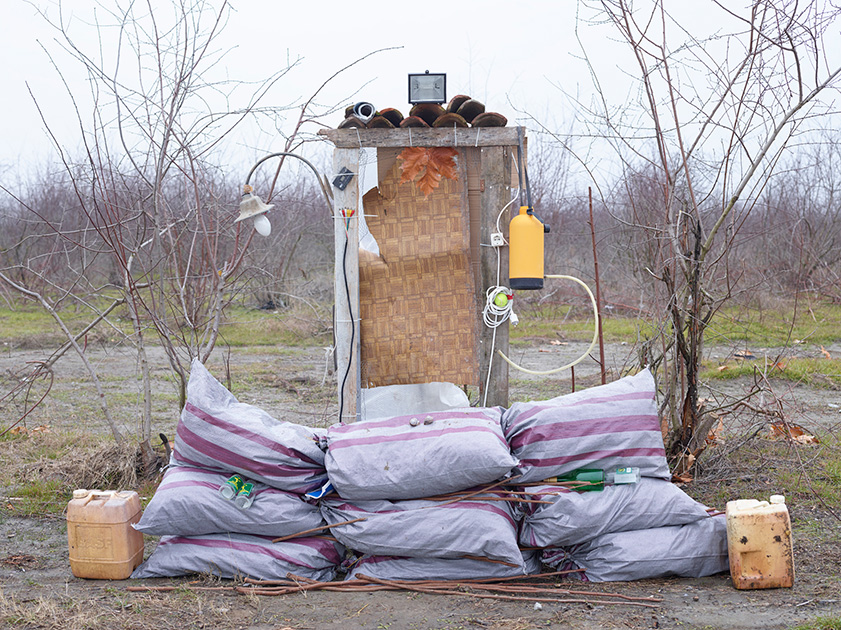 Petros Efstathiadis returns to his hometown, a small village in Central Macedonia called Liparo Pellas and turns it into his physical studio. The village which gradually appears at the background of his pictures does not have any attractions, nor is characterized by any significant architecture, any magnificent scenery or anything similar. Instead, it stands as a blank canvas for the artist who uses it to set up his peculiar constructions.

Collecting materials from neighbors and people from around the area, objects in use and some other abandoned or forgotten in time, the artist composes surreal and often extremely banal scenes which form poetic images full of information and emotion. In the work Chicken Soup Efstathiadis mounts a prototype construction that implies much more than what its title describes.

This Chicken Soup is a dozen things other than a soup. It is a portrait of rural Greece under a dark Balkan light. Sarcastic yet not funny. Full of clichés yet set up in a way that it overturns all known cultural and social stereotypes. Simplistic in its positioning of the camera and point of shooting, yet complex in its structure, it is an image that brings to mind Emerson’s famous words that “though we travel the world over to find the beautiful, we must carry it with us or we find it not.”