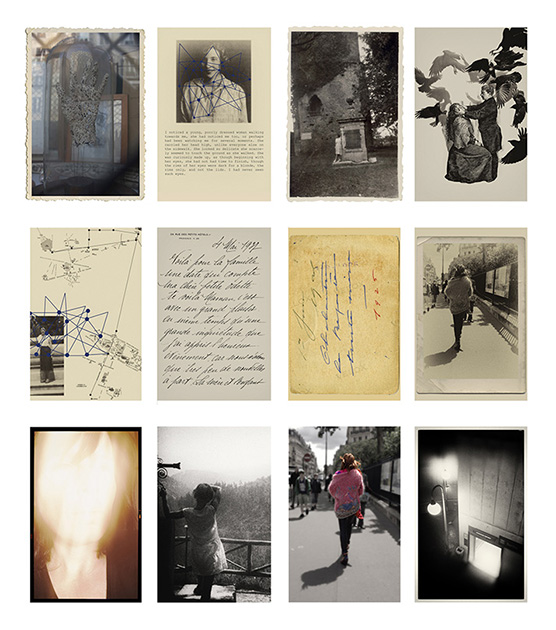 Who am I? If this once I were to rely on a proverb, then perhaps everything would amount to knowing whom I ‘haunt’.

So begins the story of Andre Breton’s encounter with the enigmatic figure of Nadja in the poet’s 1928 semi-autobiographical novel. Nadja, or Leona Camille Ghislaine D. was twenty-four years of age when she met Breton by chance on the Rue Lafayette on October 4th 1926. Struck by the otherworldly detachment of the young woman, her ghostliness and visionary quality, Breton pursued her for the following ten days through the streets of Paris. In the summer of 2012 and later, the winter of 2014, using Breton’s text and original photographs from the story by Andre Boiffard, I followed the same routes, visited the same places. I was searching for Nadja, for memories lodged in place and evoked by material traces of where she may have been, and what she might look like today. Using Surrealist techniques of chance and marvelous encounter, combined with the psychogeographical dérive and détournement of Situationalist International, I navigated the city by day and by night. As I searched for Nadja, I drew upon my own memory to write to Breton, creating a corresponding semi-autobiographical narrative, in the first person. In Postcards from a Life, I reframe memory, re-inscribing an identity lost to history, and in the process reimage the potential of a female vagabond, a Flaneuse and feminine nomadic subjectivity.