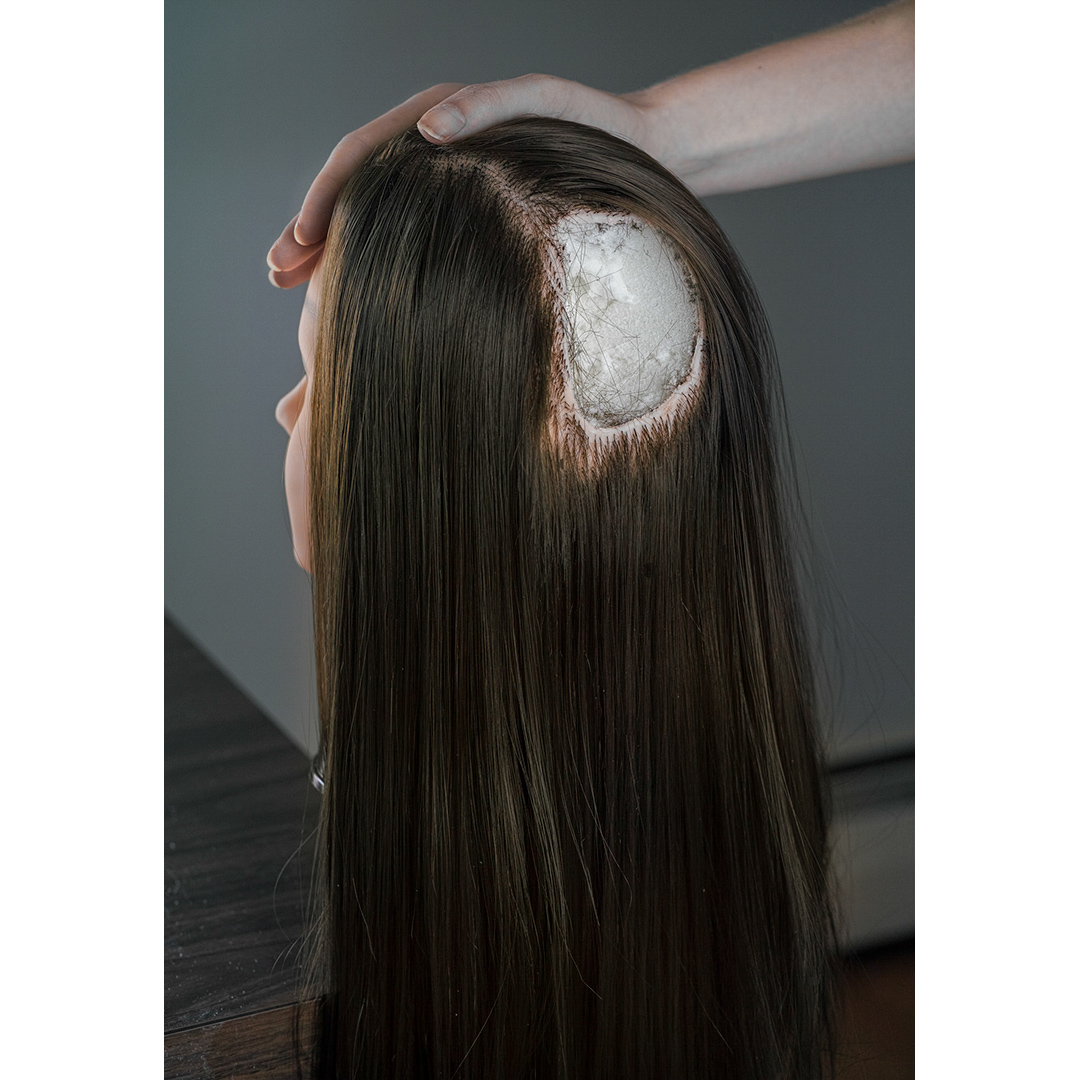 Dear Mili is concerned with invasions and exorcisms, both physical and psychological, by ideology, decay, disease, and other external forces. The pervasive desire for personal purification and self optimization gives rise to questions around authenticity of desire. This project is an investigation of the contradictory notion that the ‘self’ can be a site of both pleasure and loss, and of how the act and mechanisms of photography conceptually mirrors this contradiction. The events of both photographing and being photographed are act of negation and attestation of a slippery, refractory reality.

On view as part of the exhibition “Good Advice & Other Recipes”

The mother of his friend is a graduate of the School of Fine Arts and an active artist. This is most evident at the entrance to the house where there is a large work composed by all family members. Some years ago, him as a photography student and her as an acting student, they tried taking some photos on the porch of her house in early summer. When her mother returned home that day, she called her daughter in, and the boy lost her for more than half an hour. Entering the house to look for her, he found her on the highest shelves of the closet, saddened by her mother’s rebuke for she did not wear socks while being out on the porch.

The childhood memories of his family’s travels lead Kosmas Pavlidis away from the noisy urban environment, where he deviates creatively from the characteristics of landscape photography. In the series ‘Sunny Days – A True Story’, the artist not only looks for themes related to the way of life away from the city but also encounters figures, objects and creatures that would sometimes intensely arouse interest and other times would upset a child in its careless wanderings. Deanna Dikeman has been photographing her parents for three decades as she leaves her paternal home after her visits. ‘Leaving and Waving’ is a story about aging, sadness, and the multifaceted significance of farewell. The relationship between power and love that develops between mother and daughter, and the construction of femininity through family structures is discussed by Elisabeth Hibbard in the project ‘Dear Mili’. Concerns about starting a family in a world that may be more technologically advanced than ever but remains unpredictable and unstable are present in the project. In his new photobook ‘The Here Mother – How to Build a House’, Peter Puklus tackles the question of gender stereotypes within the family institution, creating self-portraits, staged photographs, and sculptures.

Birthe Piontek looks into the way in which individual relationships in a family are shaped by the processes of adulthood, aging, and ultimately emancipation. The project deals with the elements that create a family: not only the DNA genes, but also the stories and secrets, the objects with which the family members are surrounded from generation to generation. Through the series ‘Abendlied’ she pays great attention to the “unspeakable”, which is unique in every family. In recent years, Maria Mavropoulou often examines how technology affects the daily communication of people. Her work ‘Family Portraits’ focuses on the home interior. Antonia Petriti deals with the daily life of young people, focusing in her diary on the stages of independence, the courageous youthful “opening of wings” and the rejection of the patriarchal model of the housewife. Martina Zanin portrays the complex relationship between herself, her mother and the “man”, an unstable figure, who is mainly represented as a form of absence in her work. The series ‘I made them run away’ combines archival material, letters from the photographer’s mother and photographs, bringing together memories from the past and emotions of the present, exploring the dynamics of emotional relationships – the need for attention, the expectations that bring out frustration, insecurity, and crisis. We can finally choose our family in the section ‘My Family’ by Judith Van Ijken, in which the creator is photographed together with complete strangers and the result makes us wonder about the relationship between memory and the medium of photography.

The roles, the structure and the usefulness of family are constantly changing. Challenging tradition and defying the advice of previous generations are usually important components of its evolution, while at the same time their selective maintenance seems either like a challenge or in some instances like a spontaneous act. The group photo exhibition ‘Good advice & Other Recipes’, while avoiding works that are strictly related to documentary photography, brings together sections of photographs that reflect the ever-changing institution of family and highlight the complexity of its evolution.