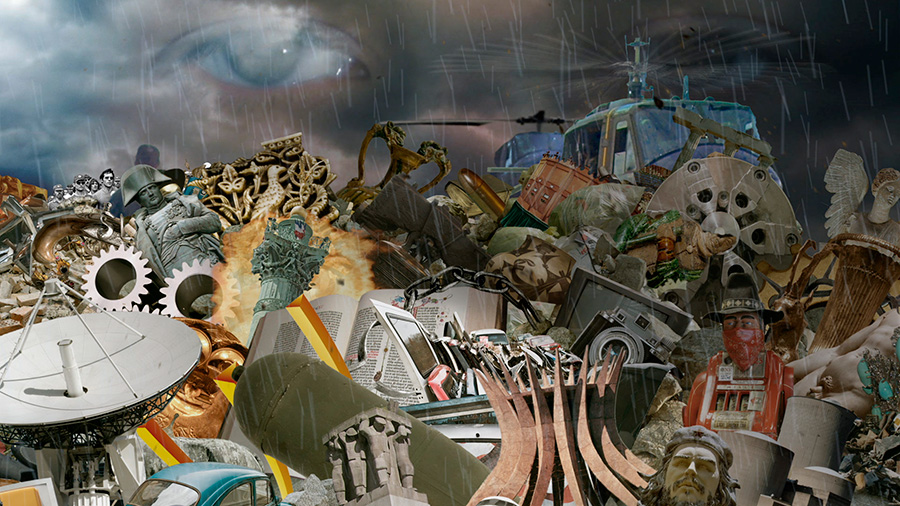 “A Klee painting named Angelus Novus’ shows an angel looking as though it is about to move away from something it is fixedly contemplating. Its eyes are staring, its mouth is open, its wings are spread. This is how one pictures the angel of history. Its face is turned toward the past. Where we perceive a chain of events, it sees one single catastrophe, which keeps piling wreckage and hurls it in front of its feet. The angel would like to stay, awaken the dead, and make whole what has been smashed. But a storm is blowing in from Paradise; it has got caught in its wings with such violence that the angel can no longer close them. The storm irresistibly propels it into the future to which its back is turned, while the pile of debris before it grows skyward. This storm is what we call progress. The true picture of the past flits by. The past can be seized only as an image which flashes up at the instant when it can be recognized and is never seen again.” (Walter Benjamin, Thesis on the Philosophy of History)

The angel of history is the inspiration for my film. Compressed into five minutes, this film animates the ruin and progress of history, starting with the formation of planets from gas clouds through to the present. The pile, culled from an online pictorial archive, depicts Benjamin’s single catastrophe. A flash of original paradise interrupts the cataclysmic momentum and reminds the viewer of the dialectic of history in which the past can be recalled only in relation to the demands of the present.