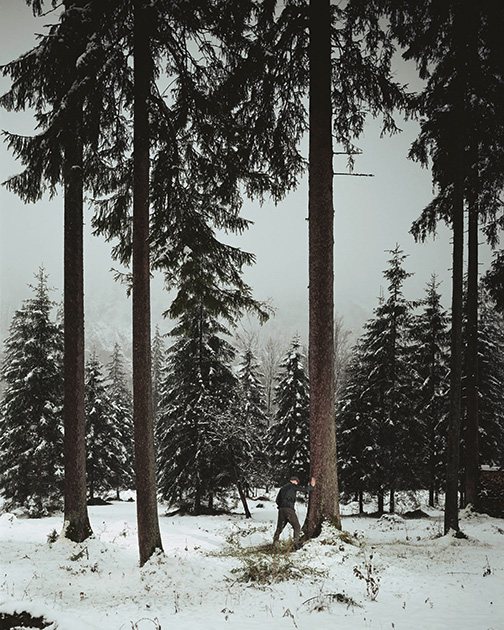 In his series Obersalzberg, Andreas Mühe analytically reconstructs photographic images of the German past that have long since been banned from collective memory. His person of reference is Walter Frentz, a photographer who contributed much to the public image of the Nazi regime. But while Walter Frentz barely had time to pose his models, Muehe draws considerable attention to the way in which he stylizes his protagonists.

In these posture studies, Nazis in uniform or standing naked in the studio are lit frontally. The poses, which appear extremely tense, are modelled after original photographs from the National Socialist era. In almost documentary manner, Mühe decodes records of the time and translates them into his own artistic language. A man in uniform faces himself in another picture, this time naked and painstakingly arranged in exactly the same pose. The tension in the man’s muscles and his concentration on maintaining the perfect pose only become evident after his clothing is removed. The studio serves both as room and background; dark, murky, and with shadows cast on the walls, it brings the past to mind. Like sculptures, the men – untouchable, unmovable, and almost absent from living reality – seem lost in the studio’s stark artificial light. The representation of power reveals itself to be an orchestration. Robbed of the aggressiveness of their status and temporally removed from the event, the Nazis in Mühe’s images immediately call failure to mind.

In the landscape works, dense forests and high mountains that appear archaic and insurmountable take up nearly the entire frame. The sites were selected based on historical factors: the landscape in Berchtesgaden surrounding the Obersalzberg served as a private retreat for Hitler and his followers. The figures are always placed at the exact middle of the picture, while nature is relegated to the background and the staging becomes pure spectacle.