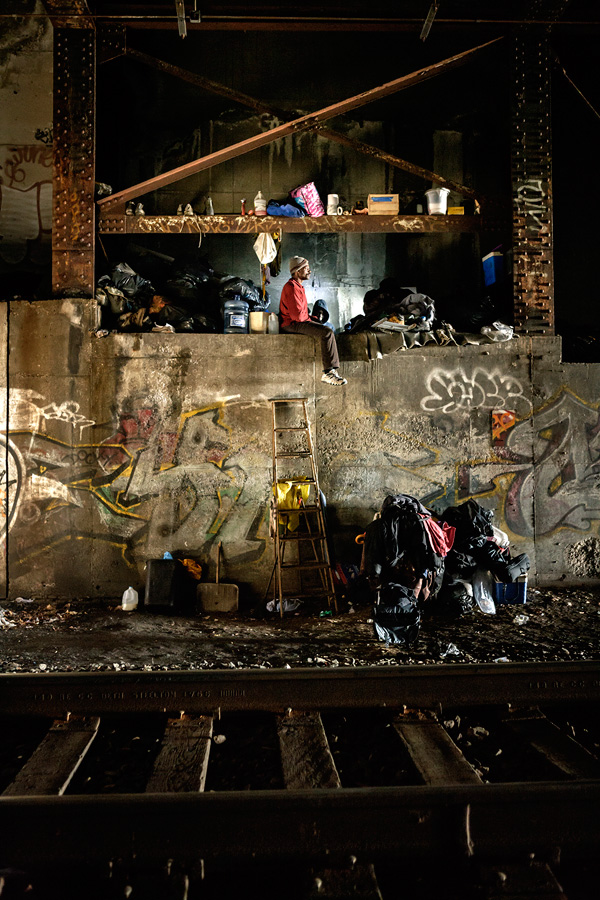 Urban Cave, photographed primarily in Harlem, New York City is a story about the resilience and humanity of people who live “homeless” on the other side of conventional society. It is about a group of individuals and the spectrum of their lives, rather than their deprivations. This series comes from three years spent on the street following unsheltered men and women who are part of an illusive culture not always considered with sympathy, and yet who accepted my company. Sometimes they just told me to follow them. I never knew what would happen or whom I would find. It is essential to me that I shoot in a way that always communicates respect and preserves the contrast and quality of light and shadow. The images are in response to the beauty of a place, a people, and the dignity, determination, and perseverance of that particular long-term homeless culture.
Currently most of the people depicted have been placed in housing or are on track to receive it through various programs, although some have recently lost that support and are once again homeless. Many have been evicted from the sites photographed and their encampments emptied of all belongings.
Fragile and resilient, tragic and beautiful, self-destructive yet surviving, these homeless men and women are just people. Neither more than us, nor less than us they are a part of us. And they are apart from us. Nothing is simple in the shadows of the street.