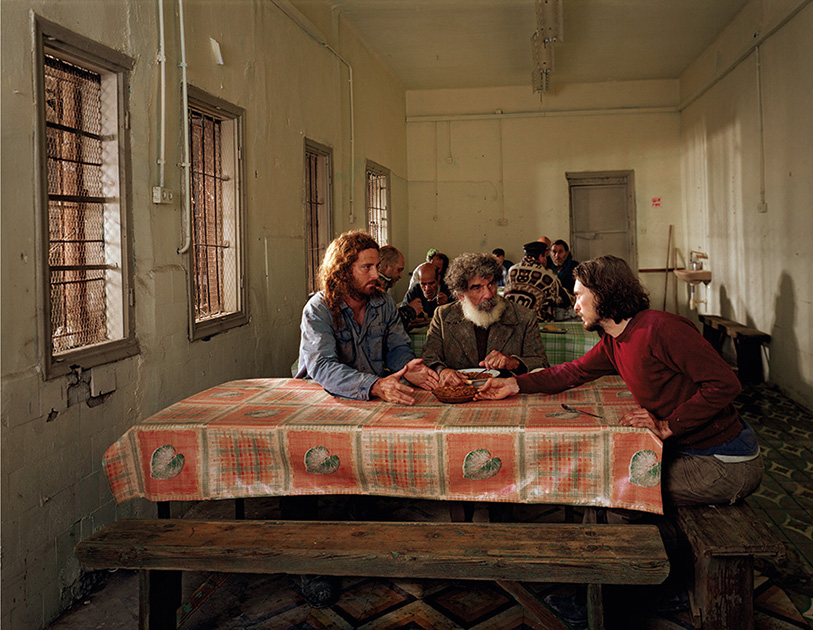 The main characters in Adi Nes’ series, Biblical Stories, are street people, the homeless, the lower class, people who find themselves at the margins of society.

In previous series Nes dealt with issues of identity: specifically masculinity and Israeliness. In this new series, he deals with people who have lost their identities.

In previous series the soldiers, for example, were photographed in wide open spaces or in military camps, the youth were photographed in peripheral, dark neighborhoods. This time though, the backdrop for Biblical Stories is the sprawling city whose inhabitants are run-down and whose streets are empty. The reality for these characters is miserable, depressing, and hopeless.

Yet these are not just any people. Each one of the subjects of this new series is based on a Bible story.  This series of Adi Nes’ photographs expose the low point to which Israeli society has sunk after the revolutionary transition from striving to be a utopian, egalitarian society with socialist values and an ethos of caring for one another, to a conquering, capitalistic, alienating society in which deep and unnecessary social gaps abound.

By juxtaposing identity-less, homeless figures against the mythical foundation of Bible stories, Adi Nes contrasts the current Israeli reality with the history and mythology of the Chosen People and projects these worrisome images of Israel’s social reality in the 21st century back onto the nation’s past.

Supported by: Embassy of Israel, Athens